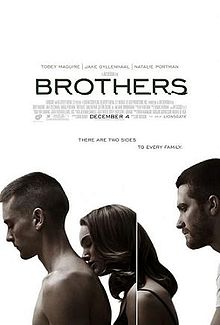 Before leaving on his second tour in Afghanistan, Marine Captain Sam Cahill, a leader, an athlete, a good husband and father, welcomes his screw-up brother Tommy home from prison. He'd robbed a bank. In country, Sam's helicopter is shot down and all are presumed dead. Back home, while Sam wastes away as a prisoner in a remote encampment, Tommy tries to take care of the widow and her two children. While imprisoned, Sam experiences horrors unbearable, so when he's rescued and returns home, he's silent, detached, without affect, and he's convinced his wife and brother have slept together. Demons of war possess him; what will silence them?