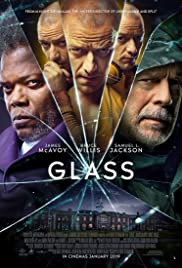 In a series of escalating encounters, security guard David Dunn uses his supernatural abilities to track Kevin Wendell Crumb, a disturbed man who has twenty-four personalities. Meanwhile, the shadowy presence of Elijah Price emerges as an orchestrator who holds secrets critical to both men.

Glass is a 2019 American psychological superhero thriller film written and directed by M. Night Shyamalan, who also produced with Jason Blum, Marc Bienstock, and Ashwin Rajan. The film is a crossover and sequel to Shyamalan's previous films Unbreakable (2000) and Split (2016) and the third and final instalment in the Unbreakable trilogy.