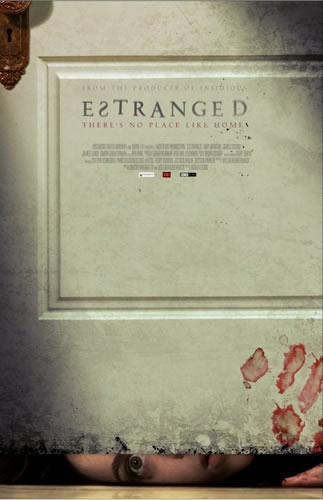 January is forced to return home after six years travelling abroad. A near-fatal accident has left her temporarily wheelchair-bound and depleted of her long-term memory. She is accompanied by her boyfriend 'Callum' whom she met whilst travelling.

He was also the driver in the fateful accident. Not only has she forgotten her family, but her childhood as well and is surprised to discover that her home is a stately manor in the middle of the country-side.

As January tries to settle in, she finds herself becoming even more estranged from her family, who just want their daughter back. The trouble is, she cannot remember who that daughter was, or why she ran away in the first place.

Desperate to discover why she left all those years ago and with Callum's help, she sets out to find the truth.

They soon discover the family are not as loving as they seem to be. Was there a dark reason why she left them in the first place?

ESTRANGED is a low budget British horror film that screams derivative at every step. Estranged has more than its fair share of intrigue and unexpected turns.

Ozus' World Movie Reviews: The transfixing directorial debut of Adam Levins, "Estranged" creates an encroaching sense of imbalance and peril very early on, and doesn't let up until the end credits.

Right off the bat, I can tell you that Estranged is what M. Night Shyamalan's The Visit (2015) wanted to be. And with one of the producers behind the Paranormal Activity (2007) and Insidious (2010) franchises, as well as The Visit itself – one has to wonder why this superior film wasn't given the royal treatment by one and all.