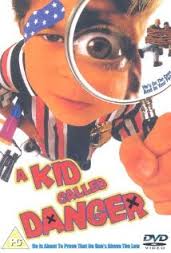 He's on the case, and in your face!

A young boy dreams of someday becoming a detective just like his father. Dane McQuire, nicknamed "Danger" by his friends, is the 13-year-old son of a police officer.

He may not, at 13, be old enough to hold an official cop's badge like his dad, but that doesn't stop him from sleuthing whenever he gets the chance. A jewel thief has been at large for some time, without the official forces of law and order making any headway into catching him. Dane decides it is time for a more diminutive detective to take up the case, and he gathers together a squad of equally inexperienced deputies to help him.

A boy spots an escaped criminal and enlists the help of three friends to stake out an apartment which he suspects the felon is about to rob. This course of action involves extreme danger, not only for the four amateur sleuths, but also for the apartment's unsuspecting occupant.

Pre-teens may find this film exciting and full of suspense.

Tagline: He's on the case, and in your face!