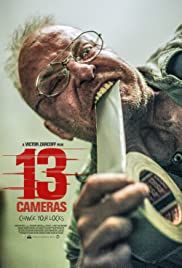 Newlyweds Claire and Ryan have just moved into a new house. Both are hoping Claire’s pregnancy will be the cement needed to hold their already fraying relationship together. Little do they know their marital issues are the least of their problems. For unbeknownst to them, their scruffy, sleazy and lascivious landlord has installed numerous miniature cameras all over their home and has been spying on them from Day One. Then Ryan begins an office affair, and the landlord kits out the secret basement with chains and soundproofing. Something is going to give in this suburban shocker packed with nasty surprises.